Trails, greenways and blueways provide innumerable benefits to our communities and enrich our lives in many ways.

Here you can learn about various studies that have shown significant health, environmental, economic and social benefits from having publicly accessible green spaces in our daily lives.

Most recently in 2022 the Institute of Transportation Research and Education (ITRE) at NC State University completed an economic impact assessment of six trails or greenways within the Carolina Thread Trail network. The study calculated substantial dollar values for annual trail benefits reflected in the economy, healthcare savings, carbon storage and sequestration, and emissions reductions. 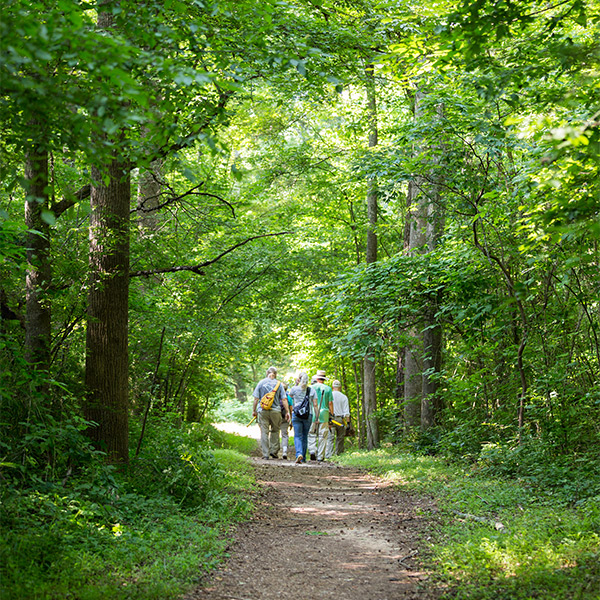 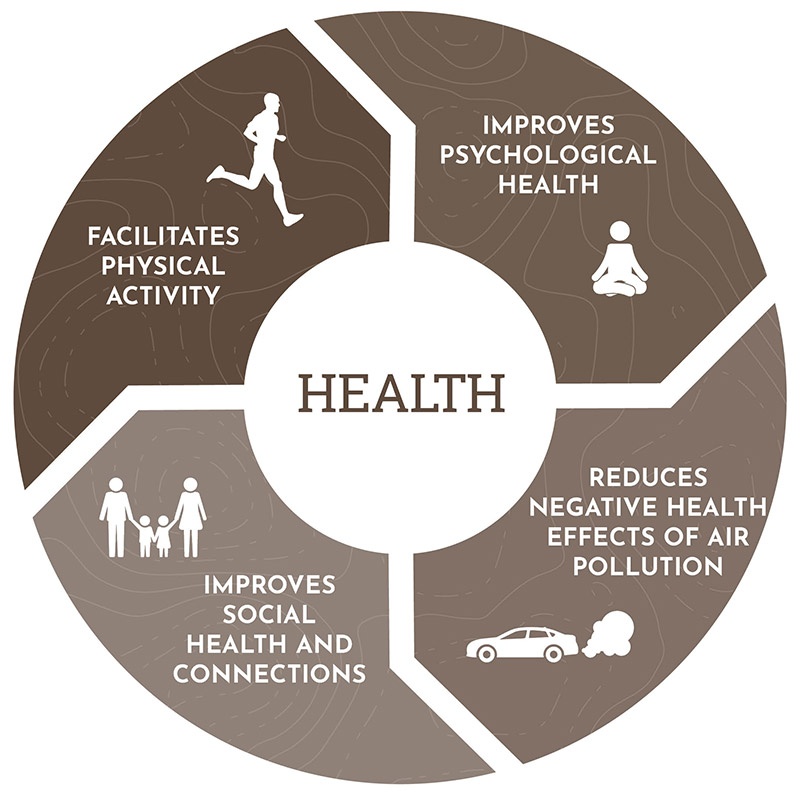 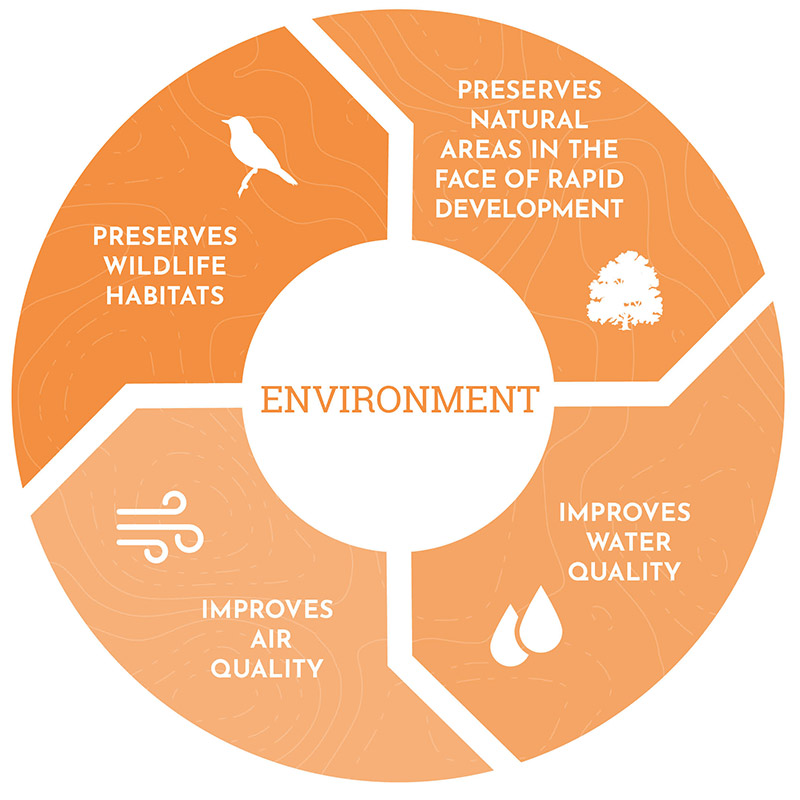 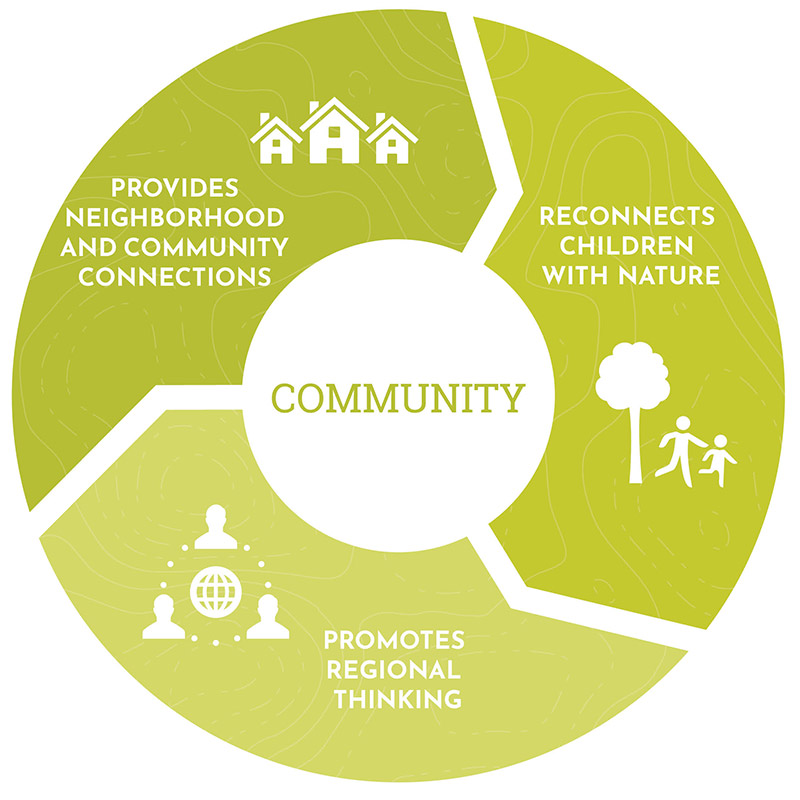 Greenways and trails not only encourage friends, families and communities to interact with each other and nature, but they also provide a venue for physical activities such as walking, jogging, running, in-line skating and biking. The associated physical and psychological health benefits of these activities are significant. Greenways and trails help to:

A landmark report by the U.S. Surgeon General found that “Americans can substantially improve their health and quality of life by including moderate amounts of physical activity in their daily lives.” It also found that “health benefits appear to be proportional to the amount of activity; thus, every increase in activity adds some benefit.”

The American Academy of Pediatrics released a report highlighting the impact of inactivity on the alarming increase of overweight children. The report underscores the importance of creating our communities in a way that children will engage in physical activity as a part of their daily lives

A growing body of research suggests that mere contact with the natural world improves psychological health. Green settings have been shown to relieve feelings of anxiety and improve our ability to cope with stressful situations. In some cases, natural spaces provide therapy for conditions such as Attention Deficit Disorder and improve cognitive function and work performance. In addition, greenways, trails and parks provide safe places for kids to play, which is vital in brain development in young children.

Greenways and trails serve as highways for alternative means of transportation. Therefore, automobiles are used less frequently, resulting in lower overall carbon dioxide levels. Additionally, increased tree density along these greenways mitigates air pollution by filtering pollutants out of the air, decreasing the number of respiratory illnesses experienced by many people.

Improve the Social Health of Communities

As a free, accessible community asset, the Thread Trail offers opportunities for recreation and exercise to everyone, including children, youth and families who might not be able to afford them elsewhere. Trails also provide a safe place for people to experience a sense of community and create stronger social and familial ties.

Greenways and trails also provide safe routes for pedestrians and bicyclists to travel. This separation from traffic can reduce the number of vehicle-pedestrian and vehicle-bicyclist related accidents.

Article:  “Take a hike and call me in the morning,” The Washington Post

The economic benefits of greenways and trails to the surrounding region are numerous. An economic impact assessment completed by ITRE in 2022 calculated millions of dollars of annual benefits for each of the six trails/greenways studied. Funding for the study came from Catawba Lands Conservancy, Mecklenburg County, and the City of Mount Holly. Findings across all six trails include: 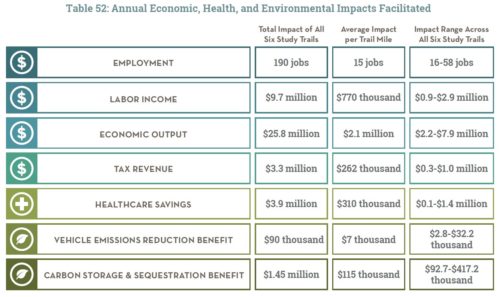 Homes in the affected area of the Carolina Thread Trail have increased in property value.

The trail not only brings new visitors and tourists to the region and injects new dollars into the local economy, but also promotes connectivity between tourist destinations for visitors, as well as local residents.

The cost to complete the Thread Trail will exceed $300 million. Already, this investment has generated significant economic benefits, including jobs for the local communities and enhanced real estate values across the region.

Information from industry professionals and site selection firms supports the significance of greenspace and trails for business development and attraction. The trail creates a strong draw for young professionals choosing to reside in or relocate to the area.

Reduced runoff associated with the greenway landscapes of the trail mitigates storm water management and treatment concerns. Additionally, the associated tree cover within the greenway contributes significantly to the air quality by removing tons of particulate matter per year. Encouraging and implementing these natural enhancements results in less costly cleanup of polluted water and helps reduce health costs from respiratory illnesses associated with air pollution.

Establishment of greenways and trails restore natural corridors within already densely populated regions and preserve them in areas soon to be developed. This is particularly important in rapidly growing areas like the Charlotte region, which recently ranked third in population growth among the nation’s metro areas (US Census Bureau). Such substantial growth can be positive from an economic standpoint, but it places a very serious strain on the area’s natural resources such as water and air quality, open space and wildlife habitats. Greenways and trails provide corridors of natural areas within developed land, which has significant positive effects on the environmental health of the region. Some of these positive effects are outlined below. Along with these benefits, the Thread Trail raises awareness of our special natural resources and helps connect us back to nature.

Preservation of Natural Areas in the Face of Rapid Development

According to a 2007 report done by Environment North Carolina Policy and Research Center titled “Losing Our Natural Heritage: Development and Open Space Loss in North Carolina,” North Carolina’s signature woodlands, farmlands and open spaces are disappearing at an alarming rate. The Charlotte area will lose 30 percent of its natural areas by 2027, including nearly a quarter of its forest land, the highest rate of forest loss in the state. If these trends continue, the state’s treasured natural areas will disappear as vast tracts of land are developed into urban areas in the next twenty years. It is critical that our communities band together now to help preserve natural areas for the health and sustainability of future generations. In the image, you can see our region’s incredible growth since 1976 through 2030. The Open Space Protection Collaborative, led by the Catawba Lands Conservancy, commissioned UNC Charlotte’s Center for Applied GIS and the Urban Institute to develop a powerful web-based tool illustrating the loss of natural and rural landscapes in the region since 1973 and forecast future impacts of urban growth through 2030.

Tree cover provided by trails contributes to air quality by removing substantial amounts of particulate matter and carbon dioxide from the atmosphere. Trails also encourage non-motorized means of transportation, which significantly reduce air pollutants. According to the North Carolina Public Interest Research Group’s (NCPIRG) Rob Thompson, “improving air quality is particularly important because communities across North Carolina are routinely put at risk by toxic pollution linked to serious health problems. These toxic pollutants are the worst of the worst and pose tangible threats to public health that must be addressed.”

Greenways, trails and conservation corridors help to preserve habitat for many plants, insects and animals that are so important and unique to this region. Conserving the natural environment that surrounds us is an important piece of the legacy that we will leave behind for our children, grandchildren and great-grandchildren.

Because the emphasis is on empowering local communities and weaving them together, the Carolina Thread Trail is considered a “civic engagement project dressed in greenway clothes” and will help to build stronger communities in many ways. The Thread Trail helps bring communities together and builds trust as the trails are planned, created and used.

The Thread Trail provides connections from the greenway for adjoining neighborhoods and social centers such as schools, churches, and other community facilities. It helps to reinforce the identity of neighborhoods through greenway design by incorporating public art, recognizing local history and creating landmark open spaces.

Reconnect the Children of our Community with Nature

So many of our children rely on indoor activities such as video games, television and the Internet for entertainment. By preserving green spaces from development, the Thread Trail provides safe places for our children to play outside and connect to the natural world.