The Carolina Thread Trail: Trails on the ground 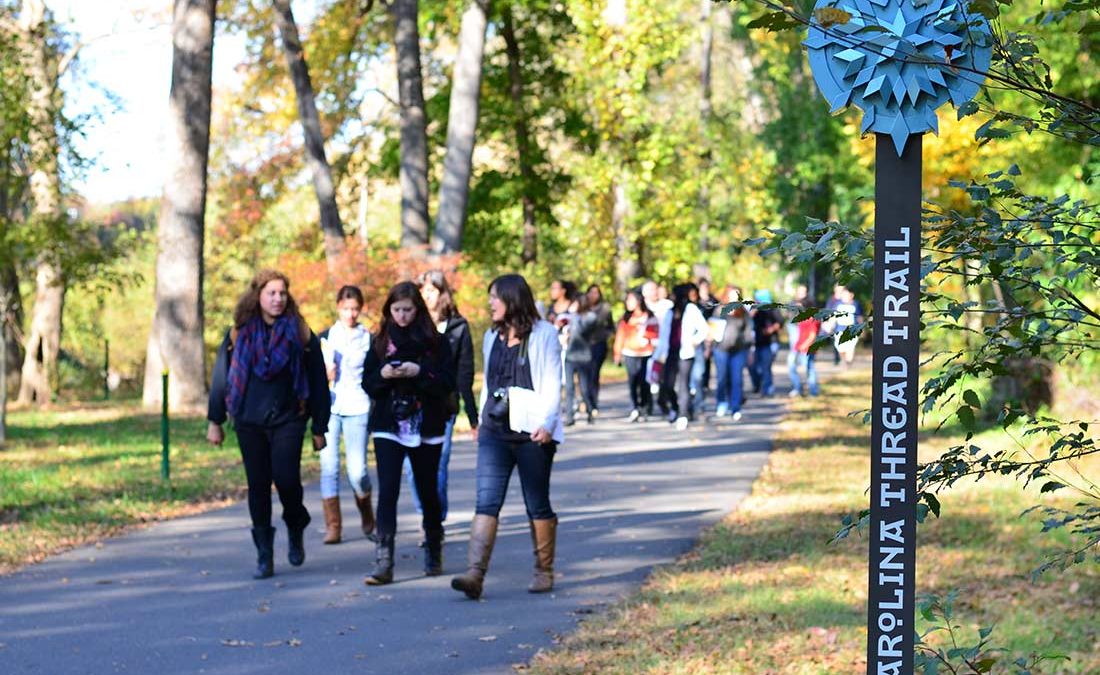 With the pairing of Foundation For The Carolinas (FFTC) and the Catawba Lands Conservancy (CLC) secured, the fledgling Carolina Thread Trail had a stable support structure and sufficient clout to begin raising capital and recruiting board members and staff. The Foundation then invited Ruth Shaw to serve as the founding Board Chair of the Thread Trail at the tail end of her tenure as President and CEO at Duke Energy. Her vast connections and expertise in fundraising helped greatly in gaining significant early contributions from Wells Fargo, Bank of America, and Duke Energy.

Ruth knew, however, that the Thread Trail could not be a project from “the Great State of Mecklenburg,” which meant that trust and relationship-building with each municipality had to come first. According to Ruth, as they learned more about this principle, the game plan of the Thread Trail “became less about raising money fast, and more about getting out and talking to the jurisdictions.” They soon hired Ann Browning as the first Director of the Thread Trail, who discussed with me some of the difficulties and lessons learned about working in the community in those early days:

“I went to Cleveland county to meet with Carl Spangler, who was interested in becoming a supporter of the Thread Trail. We drove up to his house, sat down, and I went straight to the pitch- you know I was fresh from the banking world. Carl interrupted me and asked where I was from. It caught me off guard, but he demonstrated the importance of building trust. Carl helped people get to know us as they decided whether what we were doing was worthwhile. He and I ended up having a fantastic relationship.”

Favor was sometimes hard-won in towns that were unfamiliar with greenways, and Ann and other early staff members found themselves talking directly to the Thread Trail’s greatest opponents to explain in detail the potential benefits of greenways, the collaborative and voluntary nature of the project, and the Thread Trail’s opposition to seizure through eminent domain. Michael Marsicano of FFTC explained, however, that marketing the Thread Trail was made easier by the fact that it was an intersectional solution to several important issues. “If you cared about conservation, you saw yourself in it. If you cared about health and wellbeing, you saw yourself in it. If you cared about social capital, you saw the opportunity for people to take walks together.”

One by one, each municipality passed resolutions of support for the trail network, the Thread Trail began distributing grants for trail design and planning, but with one stipulation: the trails had to connect to the next town over. This meant that neighboring towns began developing relationships and collaborating in new ways, even when, in some cases, governmental relationships had declined long ago. According to Ann, “old high school football rivals were working together again.” In towns that were suffering from the loss of manufacturing jobs, a regional trail initiative was a test run in a new kind of amenity and a new way of doing business.

As each planning department ran with the idea of developing their local trail system, a theoretical 500-mile network multiplied into a 1,600-mile master plan. Meanwhile, more fundraising dollars were rolling in to match the growing enthusiasm, and the Thread Trail began distributing catalytic funding to help the dotted lines on a map become a reality.

In 2012 the Tread Trail achieved its 100th mile, and as of June 2020 that number has risen to over 280. Progress is slow but as segments begin to link up, such as along the Catawba River in Rock Hill, or along Little Sugar Creek in Charlotte, the Thread Trail is beginning to feel more regional and more accessible than ever before.

Trail use has skyrocketed during the COVID-19 pandemic, and we are proud that these trails exist as a means for recreation, solace, and resiliency at a time when we’ve needed them most. After my year of service as a Davidson Impact Fellow, I’ve come to realize that these trails are more than the sum of their parts. What began as an idea has become so real that you can walk on it, for over 280 miles, and you can bring your friends and family, too.