The Carolina Thread Trail: From idea to action 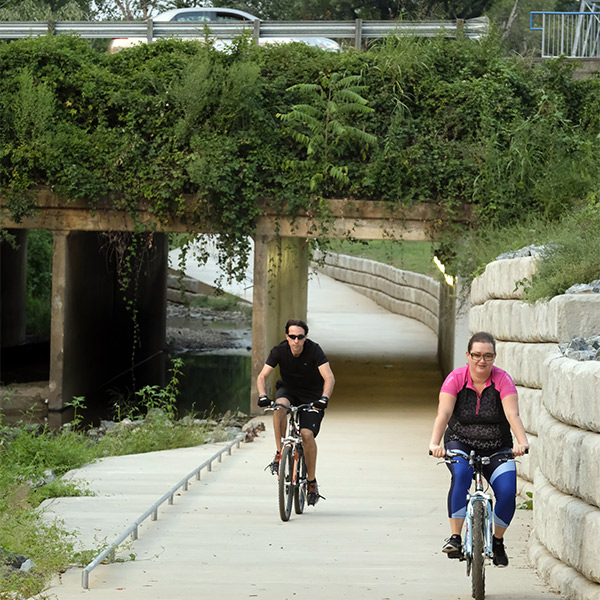 In the late 1990s Charlotte’s community leaders felt a wake up call. The city had attracted major companies that would bring the city’s economy into the 21st century, and cultural amenities such as Blumenthal Performing Arts and the Mint Museum were well established. However, the city found itself struggling to keep pace with its own explosive growth, and it became evident that our resource consumption and waste production per person was well above the national average. Some worried that even with all Charlotte had gained, if we didn’t plan for a sustainable future, even more may be left behind.

Stakeholders from across the region convened in a commission called Voices and Choices for the Central Carolinas in order to take stock of the region’s ability to develop sustainably. The Mecklenburg County Commission asked Voices and Choices to hold an environmental summit, and in November 1998, 550 people from 14 counties began work to set priorities for the region’s environmental future. The group published the Open Space Framework Plan, a conceptual plan that prioritized the conservation of open space, which they defined as “undeveloped areas,” as well as land that has been “specifically utilized for agricultural, recreational, and scenic purposes.” The report emphasized the potential of an open space “network” that connects neighborhood parks with regional parks, and suggested that greenways could become destinations in their own right.

Equipped with the open space framework, participants in the environmental summit began designing what would become the first pass at a regional trail initiative- the 3-county, 150-mile Catawba Regional Trail, a precursor to the Carolina Thread Trail. Though these initial plans included many miles of vague dotted lines connecting creeks and parks, it drew attention to important corridors such as Little Sugar Creek, and the basic design is still reflected in today’s Thread Trail Master Plan.

Though a robust regional trail plan was still a few years off, the Voices and Choices Environmental Summit and the resulting Open Space Framework formalized two ideas that would become foundational to the Carolina Thread Trail: regionalism and open space conservation.

The ideology and practice of regionalism was in part a correction to Charlotte’s sharply increasing influence over its surrounding counties. Especially after the downturn of the textile industry surrounding Charlotte towards the end of the 20th century, Charlotte’s rapid prosperity sometimes brought unwanted changes to struggling small towns. The Voices and Choices Environmental Summit, however, brought together leaders from 14 counties across two states bordering Mecklenburg, and explicitly stated the need to retain the individual character and autonomy of small towns even as “larger cities like Charlotte are our economic engines.” Now, the regional ties are perhaps more significant than ever, as the Urban Institute uncovered in their Urban-Rural Connections project published last fall. The idea of a trail network (rather than isolated segments) is born out of this early emphasis on regionalism as a path to sustainable development, and is essential to what the Carolina Thread Trail hopes to accomplish. Indeed, the current footprint of the Carolina Thread Trail includes these 14 counties from the original Environmental Summit as well as one more, and serves as a community-building amenity in urban and rural regions alike.

In a similar vein, the Environmental Summit sought to correct past mistakes by turning open space conservation from an afterthought into a priority. At the time of the Open Space Framework Plan, the Charlotte region was developing an average of 41 acres (or roughly 30 football fields) of forest and farmland per day. Participants of the summit understood that the open spaces of the region were often the areas of greatest community value, and the rapid sprawl of housing developments and shopping centers threatened to eliminate important natural and agricultural resources, as well as preclude the possibility of adding open space back into a rigid, overdeveloped landscape. Yet fighting growth is a self-defeating battle; what the region needed was a plan for sustainable development that included open space conservation, an accessible and efficient transportation infrastructure, and livable, community-oriented zoning plans.

The concept of open space conservation would become central to the mission of the Thread Trail. By linking main streets, creeks, schools, parks, nature preserves, and neighborhoods, the Thread Trail is a transportation alternative as well as an outdoor recreation opportunity. The open space framework recognized access to nature as a fundamental need for all communities, and the Thread Trail became the means of connecting people to the outdoors while also connecting them to the places they want to go and activities they want to do.

The Voices and Choices initiative was a powerful force for redirecting the future of the Charlotte region to a more sustainable path. Though the initiative sparked many actionable solutions, perhaps its most enduring legacy after discontinuing its work in 2004 was its philosophical retraining of so many key leaders in the importance of regional collaboration and environmental protection. These frameworks would propel the thinking that led to the conceptualization of the Carolina Thread Trail several years later. Even now, these core values continue to guide the development of the Thread Trail as it is soon to reach its 300th mile.