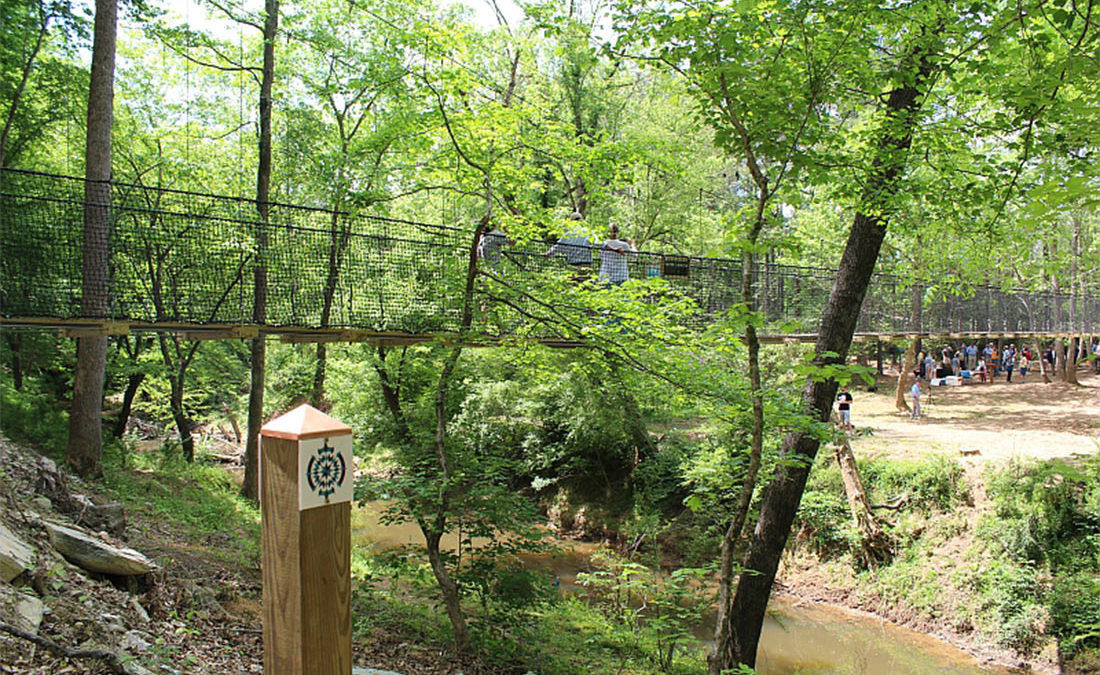 Ask Lancaster County and Waxhaw officials about construction of the Twelve Mile Creek Cross-State Bridge, the first trail segment linking North and South Carolina initiated by the Carolina Thread Trail, and the unanimous response is, “When can we do it again?”

Completion in April of the 180-foot suspension bridge over Twelve Mile Creek is confirmation that the Thread Trail vision of collaboration across communities, counties and states is thriving and communities are embracing the results.

“Twelve Mile Creek was a real choke point for bringing the trail into South Carolina,” says Thread Trail Senior Director Andy Kane. “Not just crossing the creek and bridging flood plain, but crossing the state border for the first time.”

“The trail runs along the Twelve Mile Creek embankment overlooking the woods,” says Karagounis. “It feels remote yet you’re close to over 2,000 single family homes.”

The same sentiment is echoed in Waxhaw. “The landscape contains lots of rock so it feels like you’re in the mountains,” says Waxhaw Parks and Recreation Director Natalie Jackson. Jackson says the regional planning experience was so positive that, since completion, three of their staff members went on to earn Trail Masters certification.

In an effort to deepen the trail’s impact on the local economy, Waxhaw and Lancaster County commissioned local artisans to create custom benches reflecting local geography and partnerships behind the project. There’s evidence at all points along the trail that communities are taking ownership. “It’s amazing how citizens will report issues and remove downed trees,” says Karagounis.

With an interlocal maintenance agreement in place for upkeep of the Cross-State Bridge, both jurisdictions are hoping to expand trail connectivity in the future. “Trail maintenance, especially through unincorporated land, is an issue,” says Karagounis. “Local leaders are looking for ways to expand and support these efforts with staffing and funding over the long term.”

According to Kane, the Twelve Mile Creek Cross-State Bridge is the first step in creating interstate linkages across the Carolinas.

“We’re actively working on other routes, most significantly Rock Hill’s Riverwalk toward Pineville and linkages to the west in Kings Mountain,” says Kane. “We have an amazing opportunity working with the National Park Service to push forward with the Overmountain Victory Trail, working with many jurisdictions, collaborations and partnerships.”