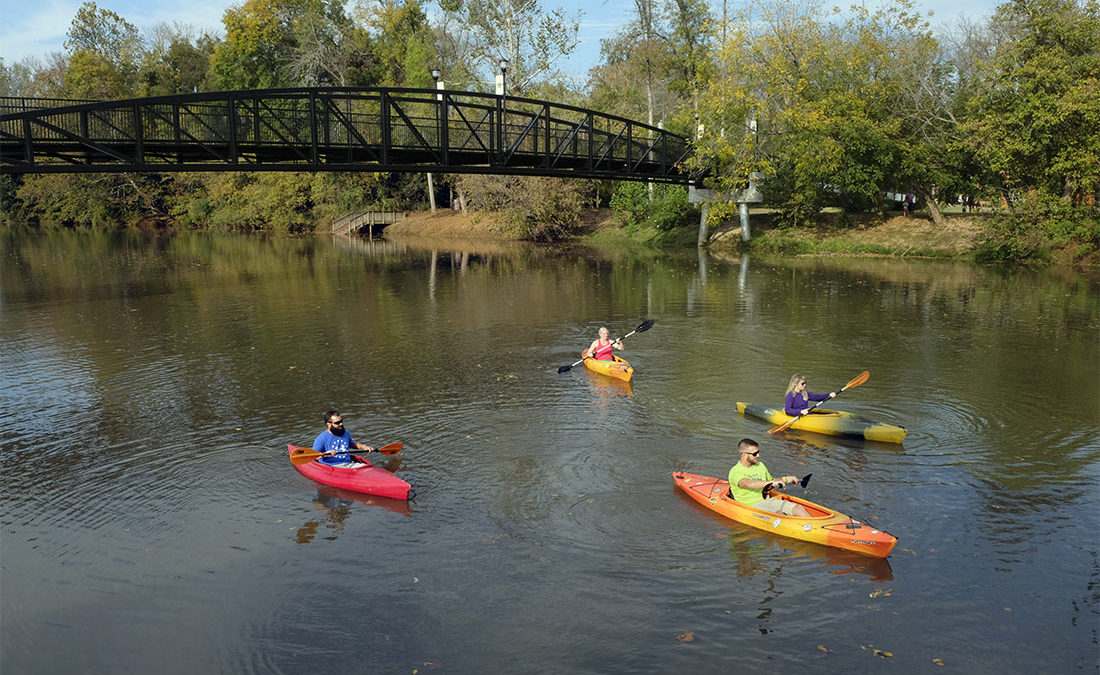 When Greg Ramsey heard Carolina Thread Trail’s blueways – or water trails – would extend into his town of Cramerton, he imme­diately saw the potential for the surrounding South Fork Catawba River to bring a steady stream of kayakers, and their dollars, to the area.

“When they started building the Carolina Thread Trail in Goat Island Park over there, I remarked to my wife, I said, ‘Somebody needs to buy some kayaks and start renting them to get people back in the river,’” Ramsey told PBS Charlotte’s Carolina Impact in November 2015.

The owner of Floyd and Blackie’s Coffee and Ice Cream in downtown Cram­erton soon opened a side business dubbed The Floating Goat to rent canoes and kayaks to outdoor enthusiasts. His initiative and positive mindset represents one of the many ways the Carolina Thread Trail is bringing bursts of economic vitality back to the small town in Gaston County.

One major benefit that trails provide to communities, beyond the conser­vation of land and preservation of nature, is economic development. The Thread Trail seeks to revive areas that have been struggling economically like Cramer­ton, a former textile town that lost many manufacturing jobs over the last few decades. Since the “green interstate system” debuted, Cramerton has experienced a wonderful rejuvenation due to a waterfront revival project, which includes a newly revamped greenway, a blueway following the South Fork River around Goat Island and a 37-acre outdoor park and recreation area connected to downtown via a pedestrian bridge. Funding for the Goat Island Greenway and bridge was a col­laborative effort with funding from many parties, including a grant from Carolina Thread Trail. Eventually, a segment of the Thread Trail will connect Cramerton to the nearby towns of McAdenville and Lowell.

“It’s changed the whole feel of the place. Kids and families are out on the trail walking around. Everyone is embracing the outdoors,” says Tom Okel, exec­utive director of Catawba Lands Conservancy. “It has been a great entry point in terms of educating people about conservation.”

Moreover, homes located in the vicinity of the Carolina Thread Trail are ex­pected to increase in value approximately 4 percent. The population in Cramerton has doubled in the past decade, in part because the trail attracts new businesses and residents to the area.

“I came here to paddle on the river, and I loved it so much – between the trail and the river – that I got a job and moved here,” says Eric Smallwood, Cra­merton director of parks and recreation. “And I know for a fact that other people have done the same thing.”

Just as its name harkens back to the region’s illustrious textile past, the Thread Trail is reaching its potential and successfully bringing people, communi­ties and nature together in a way so that they all will flourish.